You are here: Home / Blog / Author / Alex LaGanke / Celebrating the freedom and birthday of another Appleseed client 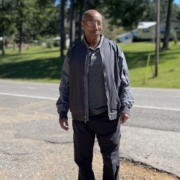 We are thrilled to announce the release of another client, Joe Bennett, today – his first free world birthday in 24 years. Once sentenced to die in prison, Mr. Bennett walked out of Donaldson Correctional Facility on September 21, 2021, after a Jefferson County judge granted Appleseed’s motion for post-conviction relief and resentencing. 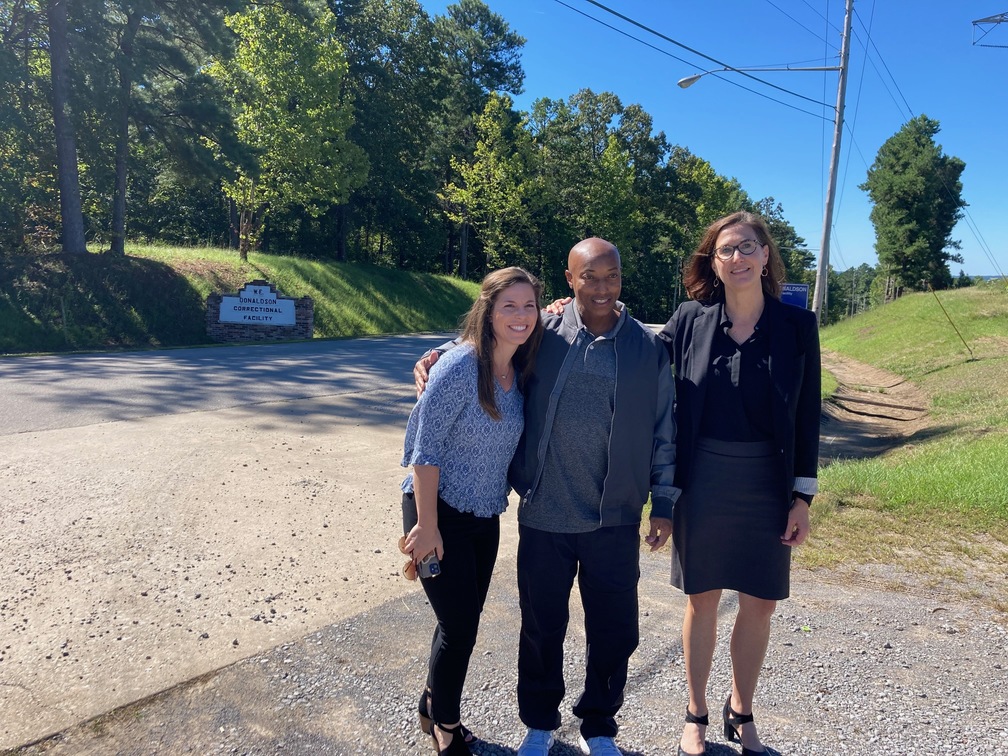 Staff Attorneys, Alex and Carla pose for a picture with the newly released Joe Bennett outside the entrance of Donaldson Correctional Facility.

Staff attorney Alex LaGanke and Re-entry Coordinator Ronald McKeithen have been working in tandem with Joe and have come together to share his story.

Alex will open the blog with background on Joe’s case. Ronald, former Appleseed client and inaugural Reentry Coordinator, will share his reflections aiding his first client through reentry.

Two Years Versus a Lifetime
By Alex LaGanke

In 1997, Joe was given two life-without-parole (“LWOP”) sentences for two counts of robbery stemming from a single incident at a barbecue restaurant in Birmingham’s Eastlake neighborhood. Joe is one of the many people in Alabama who have been condemned to die in prison for an offense without physical injury, enhanced by minor prior offenses under the Alabama’s Habitual Felony Offender Act (HFOA).

Due to changes in that law in the 1990s and sentencing reforms in 2015, three of the four prior offenses used to enhance Joe’s sentence under the HFOA could not be used for enhancement purposes today. His prior offenses included low-level felonies that are now classified as misdemeanors, including two purse snatching cases, and possession of a controlled substance.  If sentenced today, Joe would be ineligible for a sentence of life imprisonment without parole; rather, he likely would receive a split sentence with two years prison time and seven years on probation: two years versus a lifetime.

Jefferson County District Attorney Danny Carr recognized the unfairness of this sentence and did not oppose our post-conviction motion for resentencing, and Circuit Judge Shanta Owens signed the order granting immediate release. 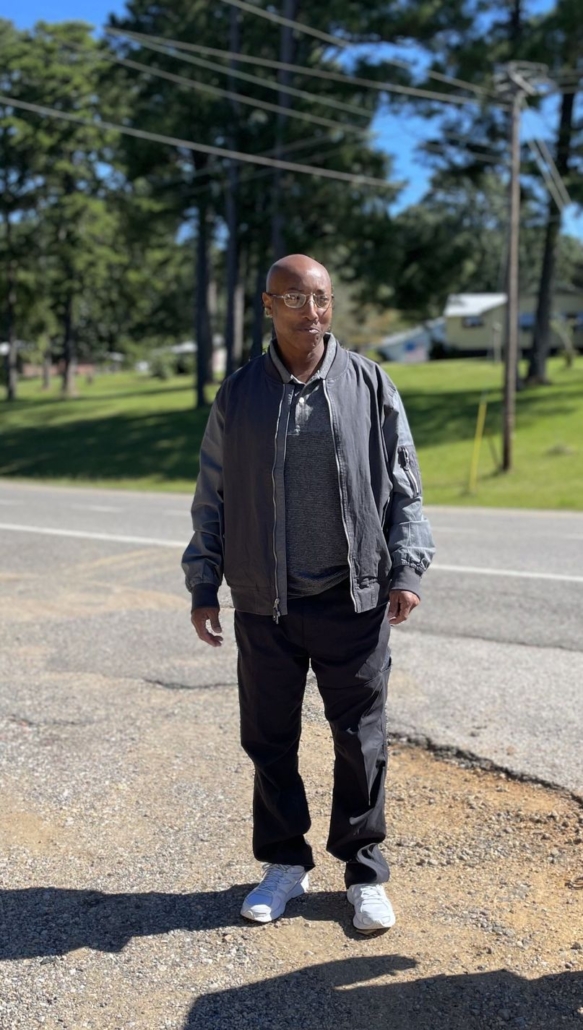 Joe Bennett on the day of his release.

At 27-years-old, Joe’s LWOP sentence meant leaving behind two small children, who are now grown adults with children of their own; forfeiting the chance at a career; and missing over two decades of significant societal changes, making adjustment to today’s world increasingly challenging. But it is also true that Joe’s prison sentence provided discovery of a wide-ranging musical talent, cultivation of a lifelong support network, and even drug rehabilitation. Remarkably, Joe managed to avoid receiving a single disciplinary infraction during his 22 years in prison. If you know anything about Alabama Department of Corrections (“ADOC”), where you can get a write-up for having an extra pack of ketchup, you know this to be a miraculous feat.

At Appleseed, we see our clients’ remarkable institutional records as a testament to the human capacity to evolve, mature, and realize unearthed potential. We have the highest regard for our clients – who are artists, Scrabble champions, ministers, musicians, and paralegals – because they corrected themselves in a corrections system that encourages anything but correction, improvement, or rehabilitation. To be clear, Joe Bennett did not just survive a corrections system that necessitates violence for protection, fuels drug trafficking, and maintains inhumane living conditions declared unconstitutional by the U.S. Department of Justice; he thrived. He was a leader, an honor dorm resident, and musician at the prison chapel.

In fact, Joe is so phenomenal that at 52-years-old (53 today!), he has been working day in and day out as a tree groundsman. But before I get too carried away with all the impressive things Joe has done since he’s been out, I’ll let Ronald take it from here to discuss, rather poetically, Joe’s reentry process.

“Who better to assist them than a person like me?”
By Ronald McKeithen

It’s difficult to describe the emotions that overwhelmed me as I waited for Joe to walk through those prison gates, the same gates I exited nine months prior after serving 37 years. Being back at Donaldson Correctional Facility that Friday in September, I found myself reliving that same burst of joy that exploded within me once I laid eyes on the people that saved my life and wondered if Joe will be able to restrain from dropping to his knees with tears of joy shamelessly flowing down his cheeks.

As I stood there, I also couldn’t help but think about the difficulties he will face as he struggles to rebuild his life in a world he hasn’t seen in over two decades. You see, my reason for being at Donaldson wasn’t just to greet a friend on the happiest day of his life, but also to ensure that his transition has as few hurdles as possible. Which is why Alabama Appleseed hired me. 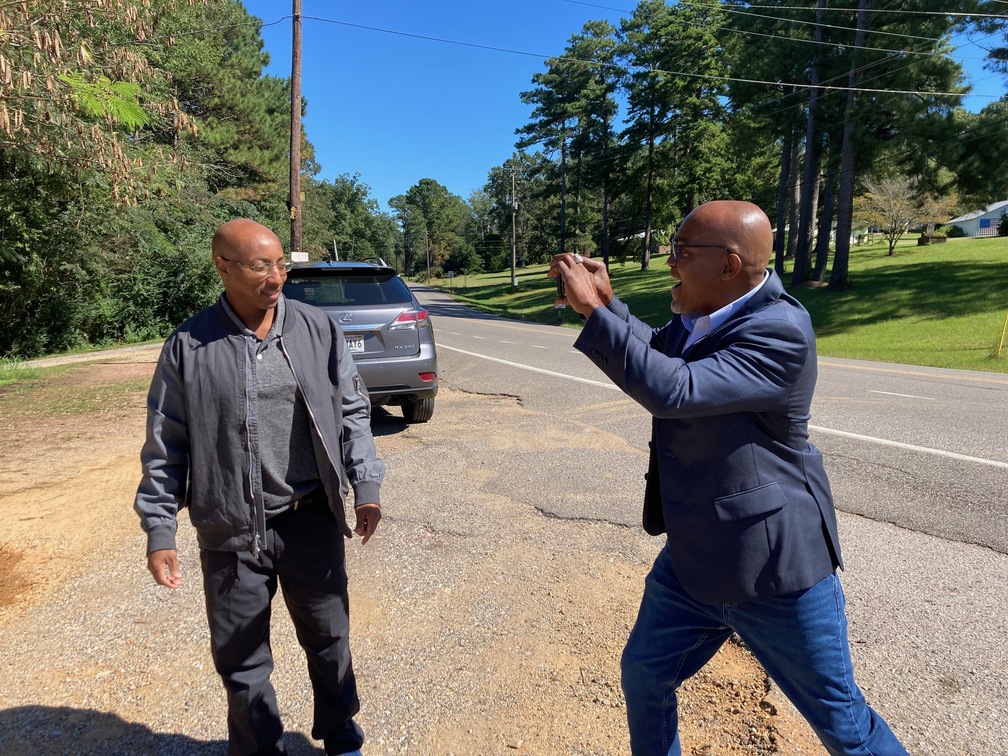 Here’s me super psyched about Joe’s release, taking an awkward pic on the side of the road at a convenient store after we got kicked off Donaldson prison campus for celebrating Joe’s release.

Freeing their clients is only the first step. Ensuring their clients’ success in becoming productive members of society has become a priority as well. And who better to assist them than a person like me who has endured the same pain and has faced the fear and uncertainty that this new world brings?

Not long ago, the State of Alabama believed that a person needed only $10 and a one-way bus ticket to start a new life after prison, regardless of how many years they served. The State has been so kind to increase it to $10 for every five years you’ve served, which is still not enough for a meal, room, and board. And for those of us who’ve served decades, we are unlikely to have the proper documents needed to get a job. Getting copies of birth certificates, social security cards, non-driver’s license, driver’s license, and medication, for starters, is a long process that will require resources, far more than the amount awarded upon release.

Here at Appleseed, we lessen our returning clients’ fears by not only standing beside them as they maneuver through this reentry maze, but also assisting them, if needed, in paying the fees of each document, finding housing, taking them on an initial trip to the store for all the necessary things returning citizens’ don’t have. And that just scratches the surface.

I have put in hundreds of miles, alongside my amazing mentor and fearless, all-knowing supervisor Alex (wow, Alex), to secure Joe a valid state ID, birth certificate, and bank account; taking him to and from a job-readiness course at Salvation Army to his tree cutting job at sites all across Birmingham; and sharing with him everything I’ve learned about this city and world that has changed so much since we were kids here.

I asked Joe to share some words about his transition thus far, and this is what he had to say: “I’m enjoying life by God’s grace through the way of the wonderful organization of Alabama Appleseed – I thank you all so much. I’m just learning, experiencing. And just knowing that I’m being a productive citizen feels wonderful and great.  I’m just elated. I can’t thank Appleseed enough.”

I even had the opportunity to talk to a long-time supporter of Joe’s and current employer, Robert Reid of Greenbriar Tree Service, LLC, who has been instrumental in Joe’s release and reentry. Mr. Reed said this about Joe: “Joe has become one of my greatest employees at Greenbriar Tree Service. He is faithful, has integrity, and does anything you ask him to. He is learning so fast and has done such a great job.” Mr. Reid met Joe at Donaldson prison through a prison ministry years ago and continues to support him by providing this job and many other supports. 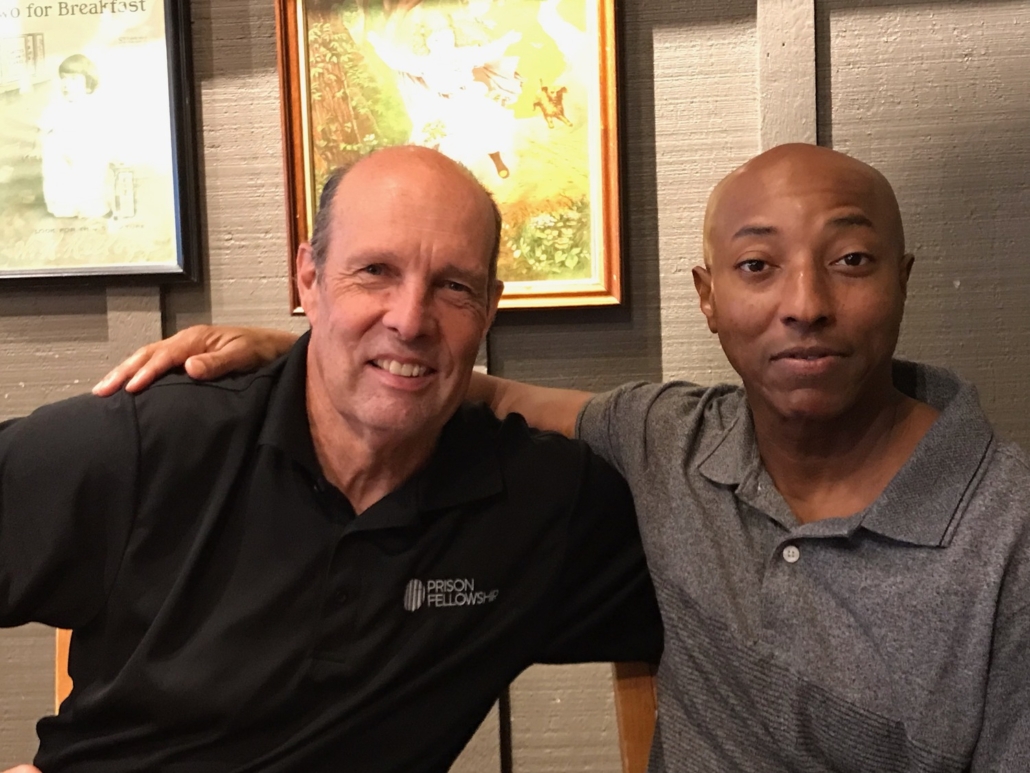 Joe and Robert pose for a picture at Cracker Barrel after Joe’s release. He wanted breakfast for his first free world meal!

I am so elated to have the opportunity and responsibility of assisting Joe Bennett as he takes necessary steps to building a life he could only dream of just a few short months ago. And I can’t wait to see what freedom has in store for him! 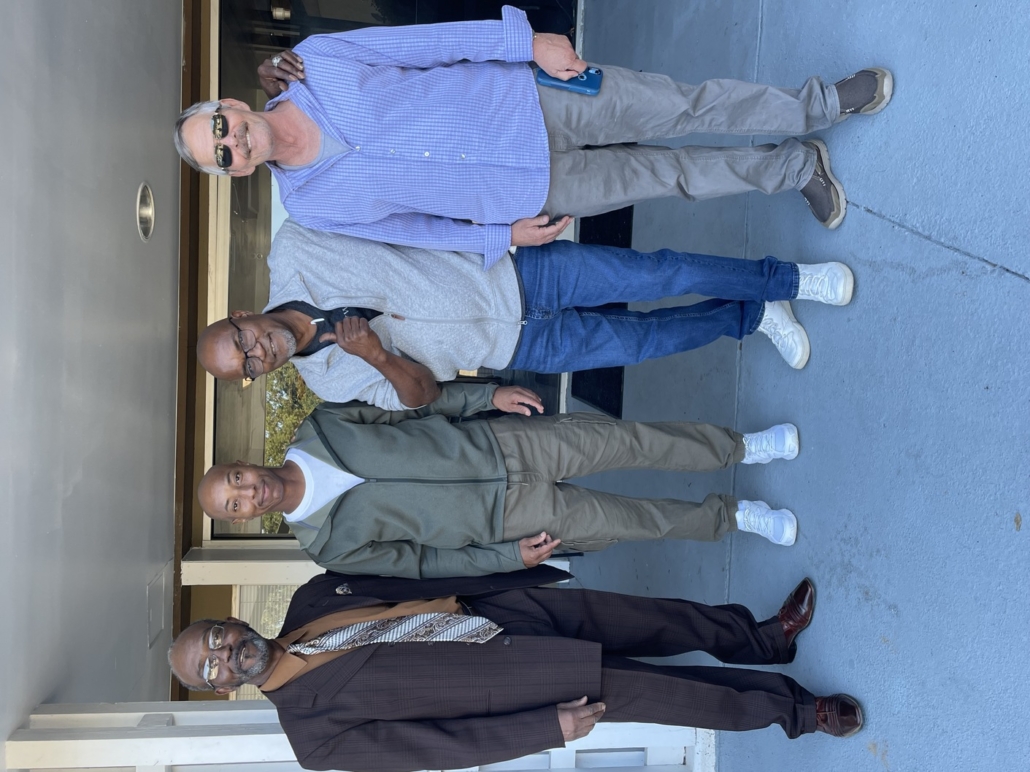 We cannot do this work alone

Over the last year, Appleseed has worked with incredible partners – individuals and organizations who care deeply about returning citizens and help provide the necessary supports. We would be remiss in giving thanks where it is undoubtedly due, to our amazing community partners whose resources, services, and kindness to the most vulnerable make acclimation for our clients possible:

Ronald and Alex are signing off, but stay tuned for more updates on Joe’s amazing progress and Ron’s job with Appleseed!

Tweets by @AlaAppleseed
When freedom means freedom for veterans, not just the country they fought f...

We’re Hiring a Legal Fellow to Join Our Team Fighting for a Better Alabam...
Scroll to top