You are here: Home / Blog / Author / Leah Nelson / This Veteran’s Day, Sean Worsley is finally home with his wife. May Alabama l...

ELMORE, ALA. (Nov. 9, 2020) – Sean Worsley finally walked through the gates of Staton Correctional Facility this morning and into the arms of his wife Eboni. It was a moment nearly 11 months in the making. 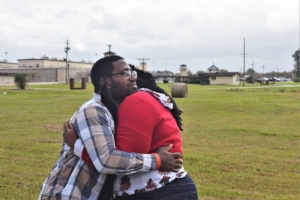 Sean Worsley reunites with his wife Eboni Worsley after being released from Draper prison. Photo by Jill Friedman

Worsley is a disabled Black veteran who was awarded a Purple Heart in connection with his service disabling roadside bombs in Iraq. He was arrested in 2016 in Gordo, Ala., for the mistake of bringing his legally prescribed medical marijuana from his home state of Arizona into Alabama, where possession of any amount of marijuana for any reason can be a felony. He pleaded guilty in 2017 and was sentenced to probation, and allowed to serve that sentence in Arizona.

Homelessness, financial instability, and the differences between Arizona and Alabama drug laws thwarted his efforts to comply with the terms of his probation. He was arrested in January; then a Pickens County judge revoked his probation and sentenced him to five years in prison.

His bid for parole was granted last month.

Worsley emerged this morning into a world turned upside down by the Covid-19 pandemic, a dramatic presidential election, and months of civil unrest over police violence against Black Americans.  His journey since his Jan. 11 arrest in Arizona has been an object lesson in how government resources were squandered on over-punishing a Black man. Worsley spent two months in jail in Maricopa County, Ariz. awaiting transport to Alabama. In March, he endured 10 days in a prison transport van that made multiple stops in far-flung locations before depositing him in the Pickens County Jail in Carrollton, Ala. He would stay there all spring and summer because the pandemic slowed inmate transfers from county jails to Department of Corrections prisons. 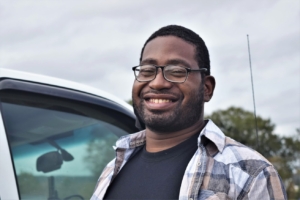 Sean Worsley, a Purple Heart veteran incarcerated by the State of Alabama for medical marijuana, finally has something to smile about. He is free. Photo by Jill Friedman

The jail was vile. According to Worsley, the bathroom was full of mold and the dorm was infested with spiders, cockroaches, and other vermin. Worsley said there was no doctor on staff, and the nurses were reluctant to refer even serious complaints of medical distress to a doctor. Many of the men, including Worsley, suffered from mental health conditions exacerbated by the wretched environment and lack of anything productive to do.

Prisoners without family or friends to help them could not afford to supplement the inadequate prison meals with food from the commissary, so they went hungry. They also lacked regular access to sufficient soap and other personal hygiene items, even as the pandemic made those things more essential than ever. Corrections officers forced one inmate Worsley was jailed with into a shower to retaliate for the inmate’s complaints about bedding that smelled of urine. Sometimes, Worsley’s mail was kept from him without explanation. “I feel like I’m being thrown away by a country I went and served for,” he wrote Appleseed in a June letter from jail.  Worsley saw terrified men crying, coughing, and begging for medical attention. To pass the time, he slept as much as he could.

In late September, Worsley was at last transported to Draper Correctional Facility, a previously decommissioned prison that was reopened during the pandemic so newly arriving prisoners could quarantine for 14 days before moving along to their next destination. Though his religious beliefs forbid him to cut his hair, corrections officials shaved his head before admitting him to Draper, likely a violation of his rights under the Religious Land Use and Institutionalized Persons Act (RLUIPA), which protects prisoners from needless incursions on their right to practice their faiths. 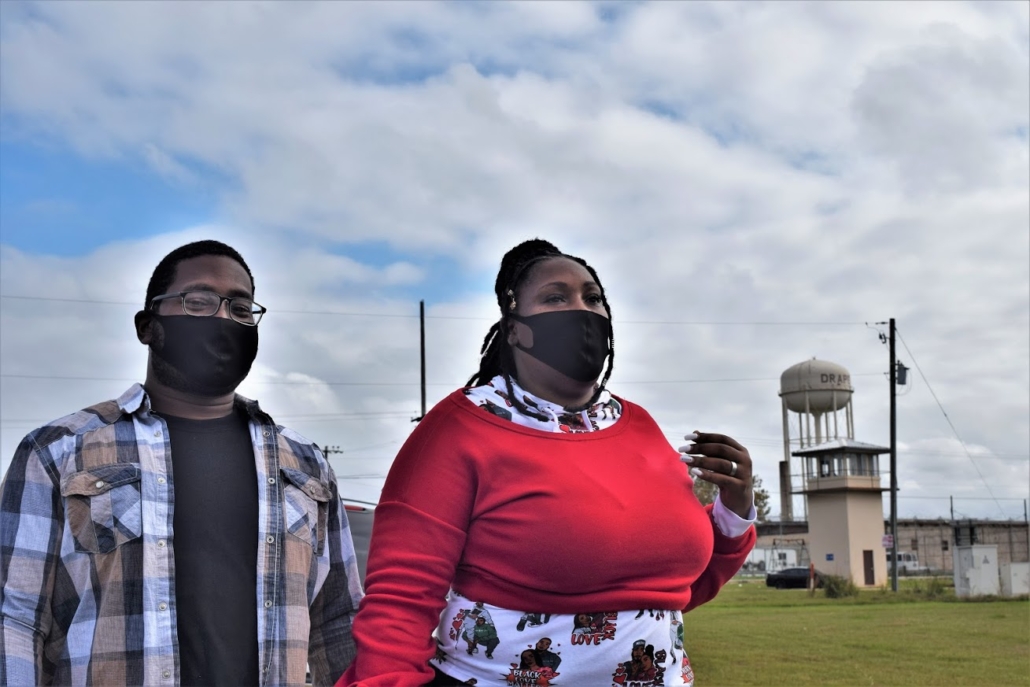 Sean rejoins his wife, Eboni, who has advocated for him through his 11-month incarceration for bringing legally prescribed medical marijuana in Alabama. Behind them is Draper prison, one of Alabama’s notoriously horrific state prison, where this disabled veteran was housed. Photo by Jill Friedman

When Worsley finally completed quarantine, he was assigned to Staton Correctional Facility, a medium-security prison in Elmore, Ala. Other incarcerated men stole his lock and other essential belongings almost as soon as he arrived.

Worsley witnessed a fight and guards taking a huge knife from another prisoner. Knives were routine and his own life was threatened. He was forced to find a different place to sleep after it emerged that the bunk he had been assigned was directly below an area inmates used to store contraband, including cell phones. Some of his fellow prisoners availed themselves of the illegal contraband drugs that are routinely smuggled into Alabama prisons. Worsley witnessed their violent reactions to K2, a synthetic compound that can cause anxiety, paranoia, aggression, seizures, and death. He saw the horrific consequences when inmates snuck illicit drugs into the tobacco smoked by another prisoner they hated, and watched the victim melt down and bang his head on the floor as he suffered hallucinations. The guards, Worsley said, were aware of most of the illegal, dangerous activity that was going on but were powerless or unwilling to stop it.

None of this is surprising. Alabama’s jails, which are run by its counties, are notoriously disorganized and under-resourced. Corruption is not uncommon. Last year in Pickens County, where Worsley was held from March through September, a former sheriff was sentenced to 18 months in federal prison after he stole $400,000 money from the food allowance intended to feed inmates. To feed the inmates in his care, he defrauded a local food bank and his own church, taking almost half a million pounds of food at extremely low cost to himself.

Alabama’s prisons are even worse. Put simply, they are dangerous, corrupt, violent, and infested with contraband including drugs, weapons, and cell phones. Twice in as many years, the U.S. Department of Justice has deemed Alabama’s men’s prison system in violation of the Eighth Amendment prohibition on cruel and unusual punishment. 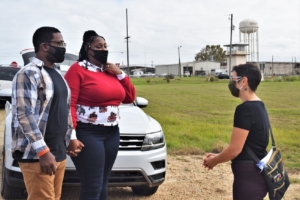 Sean and Eboni visit with Appleseed’s Leah Nelson, who first shared the story of Sean’s incarceration and continued to advocate for his release until he was freed Nov. 9. Photo by Jill Friedman

Veterans comprise nearly 10 percent of Alabama’s state population according to the U.S. Census Bureau. They are well represented in its prisons, yet but for one dorm at Bibb Correctional Facility, there is precious little programming for them despite the relatively high rate of PTSD and other ailments that combat can result in. As for mental health treatment for the prison population overall, a federal judge in 2017 deemed it “horrendously inadequate” and ordered the Department of Corrections to take immediate action to improve conditions. In 2020, that same judge found that DOC had been “unable or unwilling to take necessary steps to monitor its own practices” regarding mental health care. 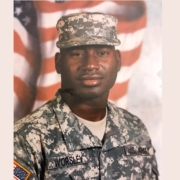 Sean Worsley served in the U.S. Army, earning a Purple Heart for injuries suffered in Iraq.

Worsley already suffered from post-traumatic stress disorder because of his service in Iraq when he was thrown into Alabama’s war zone of a corrections system. Now that he is out, he will have a great deal of adjusting to do. But a cross-sector of supporters from right here in Alabama, has emerged to help, all of whom recognized the inanity of incarcerating a disabled war hero for medical marijuana. He will soon start job training through the Dannon Project, a re-entry program that serves nonviolent offenders in Jefferson and Shelby Counties, and he has a job offer waiting for him at BLOX, a construction firm in Bessemer. He also has the support of a skilled therapist, a loving wife, and the community that has come together to support him since the story of his incarceration for marijuana possession was first published on June 30.

Even so, this man who sacrificed his youth and health to serve America will need time to heal. As Alabama observes an unusually subdued Veterans Day, let us contemplate the treatment Sean Worsley endured in the name of “law and order.” Let us be inspired by his story as we promise to take the urgent steps to change drug policy and enact long-overdue criminal justice reforms. Let us do things differently in his name.