You are here: Home / Blog / Author / Carla Crowder / Leaving prison on a walker, in time for his 80th birthday celebration 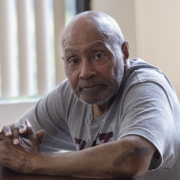 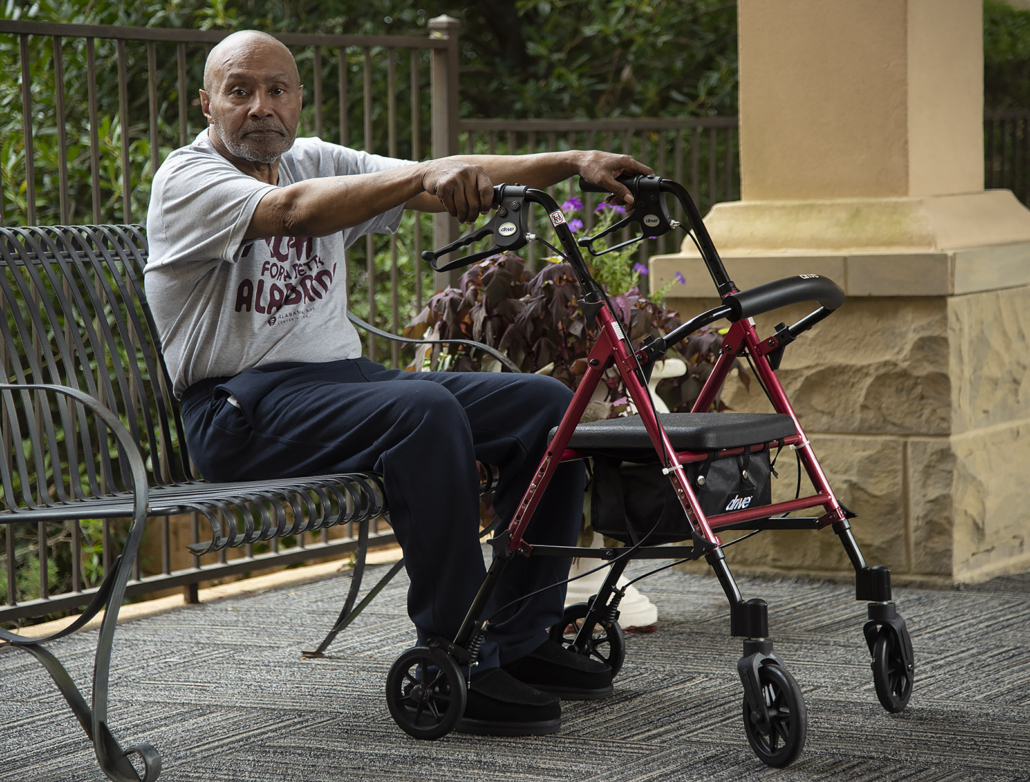 Leaning on his walker, Robert Cheeks shuffled out of Donaldson Correctional Facility and took his first breaths as a free man in 37 years. He was 79 years old.

The state of Alabama meant for him to die in prison. In 1985, Mr. Cheeks received a mandatory sentence of life without parole after being convicted of robbery. He never pulled out a gun, a knife, or a fist.

No one was physically harmed. In fact, the victim’s response was to chase Mr. Cheeks down the street. His priors – non-violent offenses including 3 forgeries that occurred in 1969 – meant the judge had no choice but to impose a death-in-prison sentence pursuant to Alabama’s Habitual Felony Offender Act, one of the harshest “three strikes” laws in the nation.

He spent the better part of three decades reporting for work in the kitchen before prostate cancer and rheumatoid arthritis sidelined him. No longer useful in the kitchen, he was left to die in the infirmary at Donaldson Correctional Facility, alongside younger men recovering from stab wounds and assaults from pervasive violence in the chaotic prison.

“I used to program myself to be without bitterness”

Mr. Cheeks is finally free, and turning 80 years old. As Appleseed celebrates his birthday with him this week, our joy comes with the knowledge that this gentle, hardworking man should not have been trapped in prison nearly four decades.

He spent his last two years of incarceration housed in Donaldson Correctional Facility’s infirmary. Too old and frail to be safely housed in the general population, he was largely confined to the grim, cramped infirmary away from sunlight or fresh air. He so rarely moved about that he did not have proper shoes when he finally walked, ever so slowly, out of Donaldson’s gates on July 22. 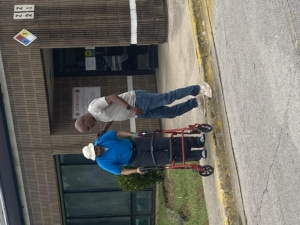 Despite sharp pain throughout his body, the worst in his hands, he has been charming everyone he meets with his gentlemanly manners and constant attempts to stay upbeat. “I attribute that to the way I used to program myself to be without bitterness,” he said.

Mr. Cheeks acknowledges the role drugs and alcohol played in his crimes. His father was sent to prison when he was a young boy. Raised by an impoverished, single mother, he fell into alcoholism and drug use and stole to support his addiction.

Once incarcerated, even with no hope for release, Mr. Cheeks set about a course of self-improvement. He chose to expand his education by earning his GED. He took classes in accounting, typing, and automotive repair. He realized he loved poetry and devoured the writings of Walt Whitman, Robert Frost, and Emily Dickinson.

For 30 years, he worked – without pay – in Donaldson’s kitchen. He served as the cook for diabetic meals, a sandwich maker, and worked on the serving line.  “I was up at the crack of dawn almost every day,” he said. “And I would volunteer to stay in there and clean up to stay away from what was happening in the dorms.”

Mr. Cheeks stopped working in the kitchen only due to deteriorating health. In June 2020, he was diagnosed with cancer and underwent surgery. His struggles with prostate cancer caused him to be hospitalized at Brookwood Baptist hospital for three months. That same year, Mr. Cheeks was diagnosed with debilitating joint and skeletal pain and inflammation which confines him to the walker and forces him to walk with a slow, unsteady gait.  His condition prevents him from stretching his fingers and causes shooting pain throughout his body and feelings of electrical shock in his mid-section. He is unable to stand without aid. Twice while housed in the general prison population, he fell in the shower.

Once situated in the prison infirmary, he became a favorite of medical staff, an affable gentleman known for imploring the young men surrounding him be courteous to one another, to stop all the fussing that so quickly escalates into violent conflicts.

Elderly people like Mr. Cheeks are the fastest growing group of prisoners

Mr. Cheeks’ case exemplifies the unintended consequences of Alabama’s overreliance on life imprisonment. Alabama has the nation’s fourth highest number of individuals sentenced to life and life without parole. The costs are enormous, draining state resources and impacting the ability of the Alabama Department of Corrections to effectively manage prisons. 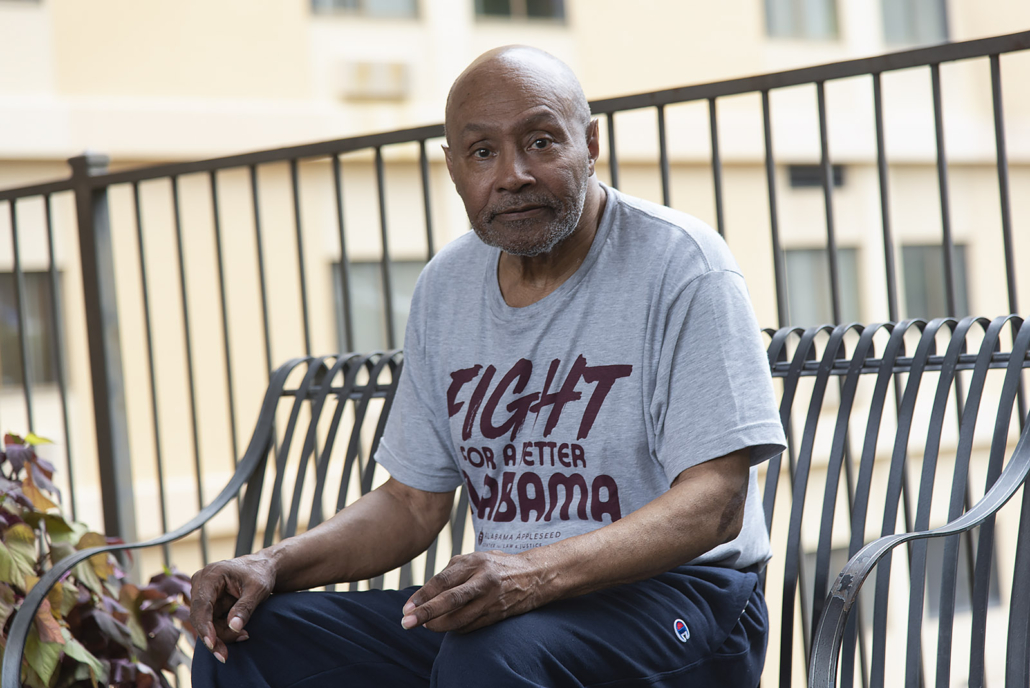 Mr. Cheeks at his new residence.

The sheer increase in the numbers of older, incarcerated people is stunning: In 1972, there were 181 individuals over the age of 50 in Alabama’s prisons. That number now exceeds 6,750. Since 2000, the population of prisoners aged 60 and above grew from 85 to 2,393. Older prisoners have quickly shifted from a small group on the fringes to nearly a quarter of Alabama’s entire prison population. Entire prison dorms have been turned into crowded, often dilapidated nursing facilities, and infirmaries have been converted into long-term housing for the most frail, people like Robert Cheeks, in order to protect them from rampant violence in the general population.

The prison infirmary was no place for Mr. Cheeks. Alabama’s prisons aren’t safe for anyone, let alone a frail, elderly man. Mindful of the danger he faced on a daily basis, in July, Appleseed lawyers filed an unopposed petition for post-conviction relief in Jefferson County, where District Attorney Danny Carr recognized the excessiveness of this sentence and joined our efforts to right a wrong. Circuit Judge Shanta Owens immediately granted the motion and ordered the release to be expedited.

Appleseed attorneys determined that under current Alabama law, he would have been eligible for parole in 1994. Given this fact, along with his age and medical condition, we were successful in getting him re-sentenced to time served and released.

Prison staff cheered as Mr. Cheeks departed their custody. As we whisked him away, a corrections officer yelled at us from the guard tower, shouting a name – someone else serving life without parole who does not need to be there.

Starting over at age 79 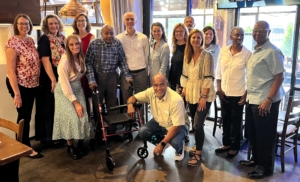 Appleseed learned about Mr. Cheeks in 2020 from investigative journalist Beth Shelburne, who has developed a database of people serving life without parole under the HFOA. “In one of his first letters to me, he told me his mother and his pen pal of 30 years had both died earlier that year, and it broke my heart. I couldn’t imagine experiencing that kind of grief in prison, alone,” she said. “He was always so positive and hopeful. The only place that can come from is incredible grace.”

A prolific letter writer, Mr. Cheeks sent Appleseed occasional cards and letters. We knew he deserved his freedom, but given his medical needs, we were not sure where he could safely live.

Appleseed lawyers visited Mr. Cheeks at Donaldson this Spring. They reviewed his medical records, realized he was mentally sharp and eager to help us plan for his life after incarceration. And they measured his feet for shoes, after learning that he had been getting around with only shower slides for 3 years. 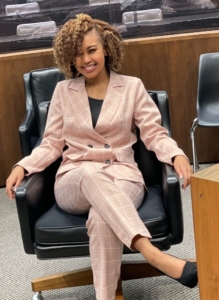 “When I met Mr. Cheeks, my initial thought was that this man looks nothing like how people who are sentenced to life without parole are perceived. He came into the prison visiting room tiptoeing on a walker, and when he spoke you could feel the warmth in his personality,” said Brenita Softly, an Appleseed Legal Intern and then a third-year law student at the University of Alabama School of Law. “He reminded me of my grandfather since they both speak with a chuckle in their voice that instantly causes you to smile.”

Brenita is using her experience gained in Alabama to represent incarcerated individuals in Louisiana.
“When I heard that Mr. Cheeks was getting released, I immediately fell to the floor thanking God. This man went from being condemned to die in prison to finding out that he gets to spend his 80th birthday as a free man,” she said.

Appleseed Social Worker Catherine Alexander-Wright researched how to secure Social Security and Medicaid as quickly as possible, should Mr. Cheeks get released. A quirk in the law prevents advocates from filing those applications while a client is incarcerated, which means we could not line up skilled nursing care in advance of his release. But once we had that court order, Catherine hit the phones and applications began flying.

On Release Day, Appleseed Attorney Alex LaGanke, along with Legal Intern McKenzie Driskell and Reentry Coordinator Ronald McKeithen, who served decades in Donaldson alongside Mr. Cheeks, picked the newly freed septuagenarian from the prison, which has been experiencing record homicides and drug overdose deaths. We couldn’t get him out of there fast enough. 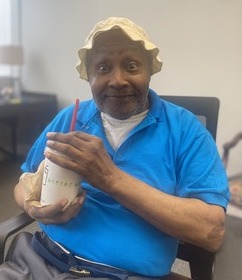 Mr. Cheeks celebrates his release day with a milkshake!

We welcomed Mr. Cheeks into his new life of freedom with cheeseburgers and milkshakes. His longtime friends, Ruth and Van Johnson – who faithfully visited him at Donaldson once they realized he had no biological family – drove up from Montgomery to join the celebration.

Thankfully, Shepherd’s Fold reentry ministry agreed to temporarily provide housing to Mr. Cheeks, while we awaited Medicaid approval. Appleseed client Alonzo Hurth, then a resident at Shepherd’s Fold, helped out, sharing a room with Mr. Cheeks and making sure he got his meals and got around safely. Within a few weeks, the Appleseed team was able to find a skilled nursing facility for Mr. Cheeks, where he currently resides.

Over the last few weeks, we have tried to provide some of what was lost during his excessive incarceration: comfortable clothes, encouraging conversations, assurances that he is free and cared for.  “It’s the least we can do for someone who has suffered so much,” said Appleseed attorney Scott Fuqua, who’s tracked down everything from poetry books to an electric razor to a recliner for our elderly client.

It is a learning experience for the Appleseed team to figure out what he needs to make the rest of his life better, to help him feel truly free.

But we know what he did not need – to die an old man, alone and in pain, in America’s most violent and dangerous prisons.

Tweets by @AlaAppleseed
Violence, then silence

Alabama man incarcerated for minor offenses is beaten by an ADOC officer; the...
Scroll to top